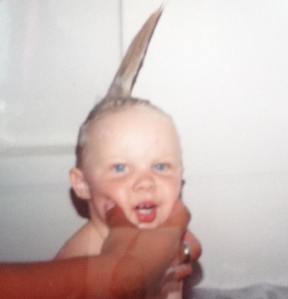 Last Thursday, for #tbt, my cousin posted this picture. Why am I stealing it this week? Because it lead to the creation of an amazing phrase. Thanks CJ!

When my cousin originally posted this photo, she had tagged herself (the one with the crazy hair) and my sister. I also recognized the hand as my sister and thought it hilarious my cousin could tell who it was just by the bronzed arm holding her face. I commented to that point and everyone in my family got a good laugh over how we all recognized my sister. Maybe it was because we have all know her for so long, or maybe because she is the only one of us who ever gets so tan.

Anyway, since I found this whole situation to be funny, I brought it up to CJ. Then he admitted to me that he too had known the hand belonged to my sister before realizing she had been tagged in the photo. When I questioned how he recognized her, he told me it was because my sister had “bitch wrist.”

I could not help myself. I immediately got my sister on the phone to inform her about her bitch wrist. She was laughing when she asked CJ to explain what he meant. His explanation – “Well, you know. A wrist with attitude.”

My sister and I both laughed hysterically about the fact that she apparently exudes so much attitude it can even be noticed in pictures of her wrist. She had better be keeping that “bitch wrist” in control.