I have never liked my birthday. Now, as an adult, I dislike it even more. “Why?” you may ask. In my experience, it seems the older you get, the more people are apt to forget. And what’s worse than a forgotten birthday? A forgotten milestone birthday.

I have always said I wanted to go big for this past birthday. But as sitters and whatnot fell through, I realized that just wasn’t going to happen. As for the day of, all I was expecting were for the important people in my life to at least say, “Happy birthday.”

CJ and I had stayed up past midnight, so we already said it to each other (we share the day). My mom called at my birth time – which I actually think is quite adorable. My dad called in the afternoon sometime. My father-in-law sent a text.  My girlfriend who shares the day as well sent a text. One of my family members, two of CJ’s siblings, and a few friends used Facebook. Members of my family remembered CJ and wished him happy birthday, but forgot we share the day. My own sister forgot both of us. Three days later when she called, I answered only because I thought she had finally remembered. She had not.

I couldn’t care less about most of this, but from my sister, it really hurt. I have done so much for her and always try to be there for her. We have already moved on, but it was just one more reason to feel like garbage on my birthday. Can’t we just skip them? Once you hit 25 and can rent a car, do we really need to keep track anymore?

This anti-birthday sentiment has kept me down for a while. Also, sickness was running rampant through our house. Except for Q’s ear infection, everything else seems to have cleared up. Let’s keep our fingers crossed that even in this crazy weather, we all stay healthy.

Does anyone else just really not like holidays that are devoted to them? I pretty much despise my birthday (always have; it’s not about the age) and so far this year, Mother’s Day has been ruined. Bad news and unsolicited advice can do that for a girl.

Just let me have my day, okay? You can ruin whatever you want tomorrow.

Here’s to hoping the day can be salvaged. Maybe CJ can work some of his magic…

But, thank goodness for my babies. I’m blessed to be their mom. 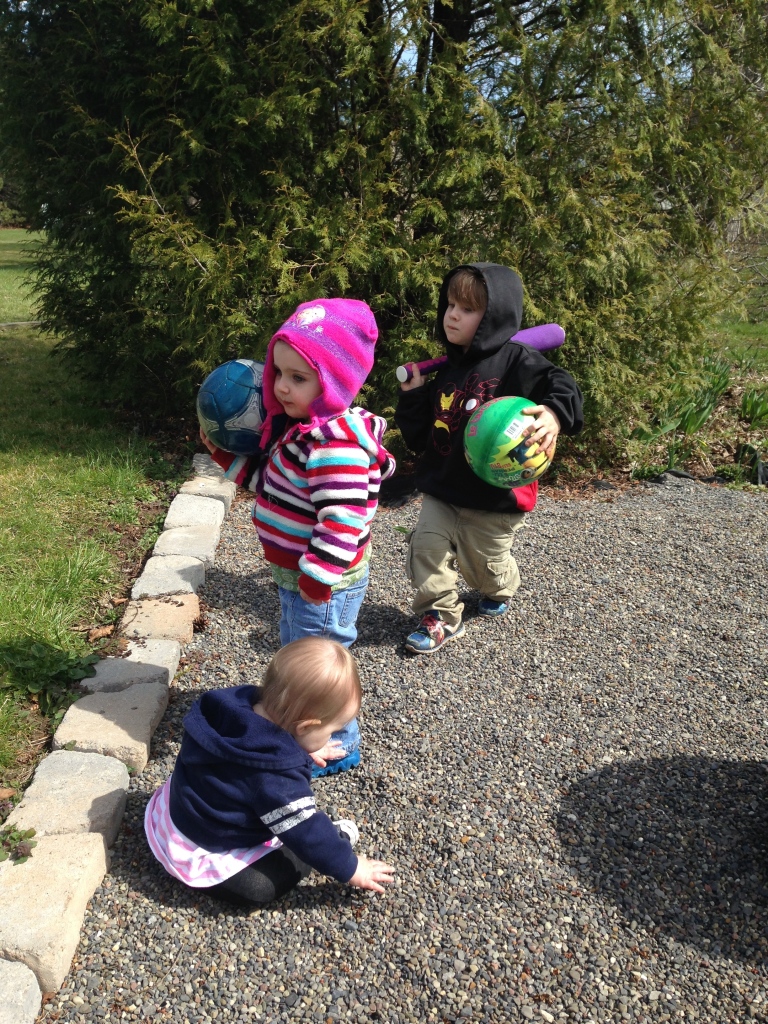 I promise, he only got the ball 🙂

Happy Mother’s Day to all the other moms out there! The work you do is important and so are you. Don’t ever let anyone convince you any different.

With the advent of all this technology, there are many avenues with which to maintain proper manners without actually communicating with someone who makes you uncomfortable. Don’t want to make a phone call and actually converse with someone? Send a card. Send an e-card. Send a text. Send a Facebook message. Get my drift?

My birthday was on Monday. I got nothing directly from my in-laws. They said something in passing to CJ, but that was all. And I was willing to accept that as being enough. Until today. Today is CJ’s brother-in-law’s birthday. Also a relative to my in-laws through marriage. He however, got a nice Facebook message for all to see wishing him a wonderful day and lots of love.

How do they not understand that I just want their love too?

This has been a difficult week for me. Last weekend, we found out that my in-laws won’t be coming to the birthday party we have planned for MJ and Q. I have been trying very hard to understand their reasoning. They want to come the following weekend so they can bring my sister-in-law’s kids as well. Goodness knows the kids only see each other when we travel there (multiple times per year versus my sister-in-law’s one visit in eight years).

Although I am trying to be understanding, they knew about this party for over one month and could have made plans to be here on the correct weekend. And why is that particular weekend so important? Not only are we celebrating MJ and Q that weekend, it is CJ’s birthday as well. He will be turning 30. How could his parents not want to be here to share that with him? He is their baby.

CJ has told me many times that this isn’t that big of a deal, but I wonder who he is trying to convince more, me or himself. My heart hurts to think that they could do this to their baby. He is the single most wonderful person I have ever met and I just don’t understand how anyone could not want to show him how important he is and celebrate the fact that he’s alive.

I love you, CJ. And at least the kids and I will be here for your birthday. We’re the best part of your family anyway. 🙂

Last night CJ took me out for a Valentine’s/birthday date. It was the first time since MJ was born that I left him for any length of time when he was not already asleep; expecting someone else to put him to bed. On top of that, it was the first time I left Q with anyone other than CJ.

CJ took me for dinner and a movie (compliments of my parents – thanks!) and we did have a lovely time. I really had to control myself though. First, from crying, which started as soon as I walked out the front door of the house. Second, from calling home about one million times while we were out.

I think at first it was hard for CJ to understand my feelings. It is not that I did not trust his parents who were babysitting. I mean, they had four kids and none of them died. It was the fact that I was leaving my babies.

On Sunday mornings when I leave them with CJ so I can teach my church school class, I feel alright because they are with their father and I am doing something important. Last night felt more like being selfish than anything even though CJ insisted that we needed a date night. He, however, leaves the kids all day every day when he goes to work. I am always with them (except for church school, of course). It was hard to conquer the feeling that I was forgetting something and it was really weird to be carrying a purse instead of a diaper bag.

I am proud of the fact that I only asked CJ to call his parents once to check on things between dinner and the movie. I wanted to call after the movie, but knowing everyone might be asleep kept me from asking. I talked all the way home; nervous chatter mostly. I bet if I asked CJ, he would not have any idea what I was talking about last night as for some reason I decided to compare Austenian heroines – something he really could care less about. I could not wait to be home with my babies.

As Q was still awake with her Bubba (CJ’s mom), the first thing I did was check on MJ. It was hard to see him snuggled in his bed knowing I had not said his prayers with him, sang him a song, and tucked him in. CJ’s parents insist it gets easier, but my mother says it does not and I believe she meant it. I can only remember a handful of times when my sister and I were little where they did not take us out with them. Hopefully I will be able to find some sort of middle ground as I am a little young yet to become a hermit. 🙂

Of course, my camera died during MJ’s party and we have no more batteries. Can’t post more pictures until I remember to buy some, but here is one of him enjoying his gluten-free cake!

Everything went off without a hitch. CJ’s mother’s BBQ and my homemade gluten-free mac and cheese went together even better than I thought they would. My pregnant sister put it all together – I do not mean just on one plate, she mixed it together – and it was amazing. CJ and I have decided that it will now be a main staple in our diet.

Today, we had a gentleman come over to measure some of our windows and give us an estimate for their replacement. The house we bought in January was built in 1951 and still has all the original windows. The appointment was at 10am and it is now 1:30pm and he is still at my house. Is it a little rude that I am blogging while he his here, maybe. Honestly, I just really wanted to vent that he is still here and I had tons of stuff to do today since I have to cook Easter dinner tomorrow for approximately 15 people.

Hopefully he will be headed out soon. He is getting borderline pushy. I think he was expecting us to sign up TODAY, and that is just not something I am willing to do. I am a nervous consumer – and that is putting it lightly. Honestly, I think we will end up getting the windows from them but I just need time to think before making such a large financial commitment.

It has been beyond crazy lately trying to get a house we have been living in for less than three months ready enough to entertain a large number of family members. Why do I need to have them over? My baby is turning one!

It is hard to believe that my baby boy is already one. He walks, he talks; where did the time go?

My family is great, but sometimes they can be a little judgemental. My mother will comment on how the kitchen is not painted yet. My grandma, who has a keen eye for dust, will let me know if I missed a spot. One of my aunts makes the cakes for everyone’s birthday parties, but I told her I wanted to do this one myself and I am sure she will let me know if it is not up to standards.

I know MJ will have lots of fun tomorrow, but I sure will not. Who ever really has fun hosting the party; making sure drinks are full, there are enough snacks out…

Somehow I managed to pull together the time to write a little more for the Yahoo Contributor Network so if anyone is interested in reading one of the two articles, here they are: “Words of Wisdom” and “My Son Creates his own Photo Ops.”

Hopefully after tomorrow afternoon, I will still be sane enough to post a few pictures of the birthday boy and of the main rooms of the house that have finally been finished. I am so proud of what CJ and I have been able to do on our own. CJ even built me my dining room table! I think it is beyond gorgeous and I never knew he was so handy. 🙂

Bed early tonight beccause I have a dragon cake to finish in the morning. Rawr! 😀